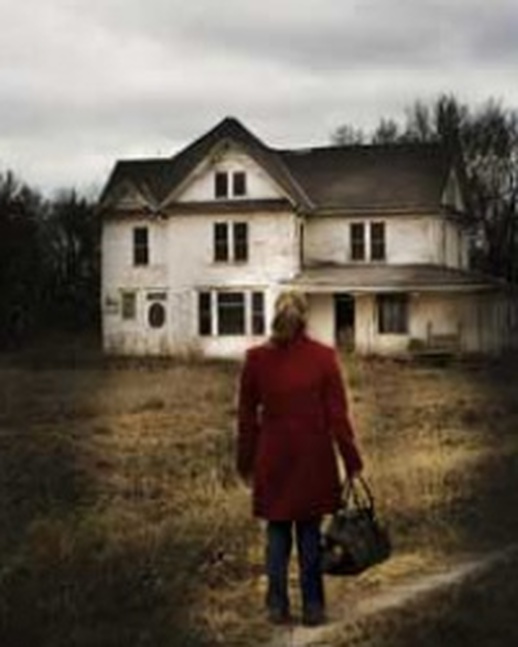 I Years had been from Home
And now before the Door
I dared not enter, lest a Face
I never saw before

Stare stolid into mine
And ask my Business there –
“My Business but a Life I left
Was such remaining there?”

I laughed a crumbling Laugh
That I could fear a Door
Who Consternation compassed
And never winced before.

I fitted to the Latch
My Hand, with trembling care
Left back the awful Door should spring
And leave me in the Floor –

Then moved my Fingers off
As cautiously as Glass
And held my ears, and like a Thief
Fled gasping from the House –
In Emily Dickinson’s poem F440, “I Years had been from Home” the speaker realizes that she has become a stranger in her own home. This poem represents the uncanny (unheimlich) perfectly, disturbing the heimlich or homely: The uncanny “is a peculiar commingling of the familiar and unfamiliar. It can take the form of…something strange and unfamiliar unexpectedly arising in a familiar context. It can consist in a sense of unhomeliness uprooted, the revelation of something unhomely at the heart of hearth and home” (Royle 1). The home should provide a space of complete familiarity and comfort. However, when the speaker is confronted with the prospect of the home, she becomes aware of the fact that she no longer belongs there: “I Years had been from Home/And now before the Door/I dared not enter, lest a Face/I never saw before” (F440 1-4). Not only does the “Door” literally/physically separate her from the interior space (F440 2), but the “Years” also stand between her and her home metaphorically (F440 1). Time transformed the speaker into someone unrecognizable, “a Face/[she] never saw before” (F440 3-4). We think, at first, that the speaker is referring to another person, but it gradually becomes clear while reading the poem that the speaker herself is the stranger. Therefore, she hesitates to traverse the boundary that separates her new, alien self from her old home, which represents her old life and former self. She anticipates this confrontation with whom she previously was but is no longer. The possibility of seeing a ghost of herself, haunting through time, causes her to “dar[e] not enter” (F440 3). This unrealized possibility constitutes the uncanny as the possibility must then reside in a liminal space—a place where something could happen but does not.

On the other hand, the ghost could be the speaker standing “before the Door” (F440 2). It seems as though the “Years” drained the speaker of her life (F440): “‘My Business but a Life I left/Was such remaining there?’” (F440 8). This lifeless, “stolid” person resembles a ghost and, thus, may simply haunt herself (F440 5). She fears looking at her own reflection, her “Face” (F440 3), where she may be faced with an altered self: “[A] person may identify himself with another and so become unsure of his true self; or he may substitute the other’s self for his own. The self may thus be duplicated, divided and interchanged” (Freud 142). The thought that the Self can become an Other is undoubtedly uncanny, and the fear this thought evokes keeps the speaker from entering the house.

Yet, even outside of the house, the speaker’s fear and past become physical presences around her: “I leaned opon the Awe -/I lingered with Before –” (F440 9-10). The OED Online defines “awe” as an “[i]mmediate and active fear” (“awe, n.1”). This terror that she experiences has practically taken on a life of its own, and she is “lean[ing]” on it as if for support (F440 9). The phrase “lingered with Before” (F440 10) means that the speaker stands with the past at the threshold of her former “Home” (F440 1). She seems simultaneously nostalgic for and fearful of this “Before” (F440 10), which she compares to “an Ocean” (F440 11). Oceans can represent both the unexpected danger (i.e. storms) and the reliable pattern (i.e. the tide). The past, much like the speaker herself, contains a frightful duality.

The simple act of standing on the threshold begins to break the speaker down. We often associate the word “crumbling” with ruins—remnants of the past—which is appropriate for this poem as ruins are visual proof of the effects of time (F440 13). Therefore, “a crumbling Laugh” feels like a half-hearted echo of her past joy (F440 13); the sound seems almost sinister in nature. She laughs at how strange it is to “fear a Door” (F440 14), so her laughter does not correspond with happiness or humor. Instead, the laughter stems from her dread and the uncanny situation in which she finds herself. This reversal—using a sign of joy to signify dread—only adds to the eeriness of the scene that Dickinson describes in this poem. The breaking down of the speaker does not occur solely with the “crumbling Laugh” (F440 13). We see it in the poem’s depiction of the speaker as well; she is in pieces: “Face” (F440 3); “ear” (F440 12); “Hand” (F440 18); and “Fingers” (F440 21). This synecdoche has dismembered body parts symbolize the person as a whole. However, despite the fact that they are meant to signify a whole person, they still, on a basic level, are merely dismembered body parts, which, in the context of the poem, is both sad and frightening. Because the poem is in the first person, we know that it is the speaker who does not perceive herself as a whole person, which is an unbelievably sad statement about her opinion of herself. At the same time, however, this grotesque representation of the speaker frightens the reader. In addition, the speaker breaks herself down into senses as well. She sees or, rather, does not see the “Face” (F440 3), and she hears both real and imagined sounds of “a crumbling Laugh” (F440 13) and “an Ocean” (F440 11) respectively. Finally, she touches the doorknob. This focus on individual senses in conjunction with the use of the first person makes this scene easier to imagine—as if the reader could easily become the speaker of the poem.

In the climactic moment of the poem, the speaker experiences the “complexity and uncertainty of crossing a threshold” (Royle 136). The word “Glass” highlights the vulnerability of this liminal space (F440 22). The speaker moves “cautiously” (F440 22) and with “trembling care” (F440 18) because she does not actually want to open “the awful Door” (F440 19). The “Home” (F440 1) from the beginning of the poem transforms into a generic “House” (F440 24) by the end of the poem. The speaker no longer associates the idea of “Home” (F440 1) with this building, and the fact that she does not belong there becomes so clear to her that she feels “like a Thief” (F440 23). The speaker runs, deciding not to return to the “Life [she] left” behind (F440 7). She decides to continue to repress the past, thereby postponing or, perhaps, eliminating the resurfacing of her past. This resurfacing—these ghosts from her past—is what Freud calls the uncanny.